If you're new here, you may want to subscribe to my RSS feed. Thanks for visiting!

Owning a smartphone is one of the most practical investments in todays economy. After owning a series of smartphones, the Apple iPhone 6 Plus is the best smartphone on the market as you will soon discover in my comprehensive best smartphone review.

After years of toying with other smartphones e.g., Blackberry and the Instinct by Samsung (remember that one?) It wasn’t until the release of the iPhone 4 that I got on board with the whole iPhone frenzy… and been a loyal fan since.

Unlike previous versions of the iPhone, the iPhone 6 and 6 Plus comes with larger LCD multi-touch screens used to highlight graphics and provide a better end-user experience; not to mention the highly anticipated extended battery life. Needless to say, bigger is always better in my opinion… hence, which is why I chose the iPhone 6 Plus with 64gb as not only my phone of choice but my personal assistant.

Although there are a ton of smartphones out there on the market… all proven to be very effective devices for business, entertainment, and personal use – we however chose the most comparable device to the iphone 6 Plus (Samsung Galaxy S5) for our comparison.

Personally I never owned any of the Samsung Galaxy models, however prior to the iphone 6 I have flurted with the idea of purchasing the Galaxy S4 simply because of size and picture quality alone. Perfect timing for Apple to introduce the 6 Plus, which is like having a small tablet coming in at 11% taller & 7% wider than the S5.

Although the Galaxy S5 has more color options available, the aluminum design of the iPhone 6 has a huge advantage over the S5 plastic build. Speaking of color, both devices have razor-sharp 1080p resolution; however I found that the S5 often has deeper saturation and higher contrast with images. Furthermore, the S5 has twice as many mega pixels in the camera which obviously works better when zooming, but takes a little longer to fire up… which can be sort of a turn off when taking photos.

In closing, I’d like to mention that the iPhone 6 Plus is now capable of making payments to participating retailers via Apple Pay. The S5 uses a similar feature with Google Wallet and Softcard. And even though Apple’s Touch ID sensor is faster and more convenient to use than Samsung’s swipe-based finger print scanner, the S5’s water resistant feature can probably save you a few dollars in the long run – specially if you tend to have clumsey hands.

Does The iPhone 6 Plus Deliver? 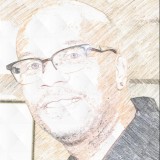 Entrepreneur and Marketer sharing the best trending Gizmos and Gadgets in today's Marketplace.

This site uses Akismet to reduce spam. Learn how your comment data is processed.